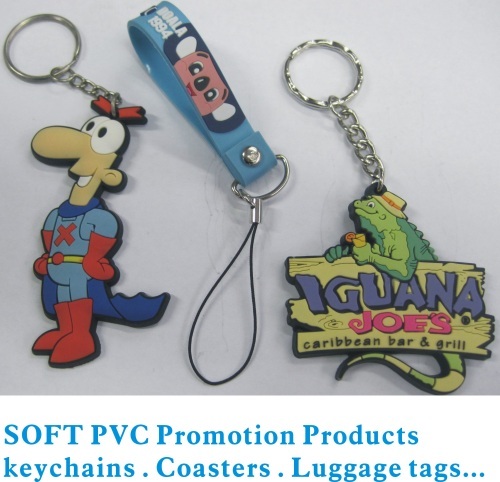 Phthalate plasticizers
Many vinyl products contain additional chemicals to change the chemical consistency of the product. Some of these additional chemicals called additives can leach out of vinyl products. Plasticizers that must be added to make PVC flexible have been additives of particular concern.
Because soft PVC toys have been made for babies for years, there are concerns that these additives leach out of soft toys into the mouths of the children chewing on them. Phthalates mimic human hormones and also affect various life forms including fish and invertebrates adversely. Additionally, adult sex toys have been demonstrated to contain high concentrations of the additives.[22] In January 2006, the European Union placed a ban on six types of phthalate softeners, including DEHP (diethylhexyl phthalate), used in toys.[23] In the U.S. most companies have voluntarily stopped manufacturing PVC toys with DEHP[citation needed] and in 2003 the US Consumer Product Safety Commission (CPSC) denied a petition for a ban on PVC toys made with an alternative plasticizer, DINP (diisononyl phthalate).[24] In April 2006, the European Chemicals Bureau of the European Commission published an assessment of DINP which found risk "unlikely" for children and newborns.[25]
Vinyl intravenous (IV) bags used in neo-natal intensive care units have also been shown to leach DEHP. In a draft guidance paper published in September 2002, the US FDA recognizes that many medical devices with PVC containing DEHP are not used in ways that result in significant human exposure to the chemical.[26] The FDA, however, suggests that manufacturers consider eliminating DEHP in certain devices that can result in high aggregate exposures for sensitive patient populations such as neonates.
Other vinyl products including car interiors, shower curtains, and flooring initially release chemical gases into the air. Some studies indicate that this outgassing of additives may contribute to health complications, and have resulted in a call for banning the use of DEHP on shower curtains, among other uses.[27] The Japanese car companies Toyota, Nissan, and Honda have eliminated PVC in their car interiors starting in 2007.
In 2004 a joint Swedish-Danish research team found a statistical association between allergies in children and indoor air levels of DEHP and BBzP (butyl benzyl phthalate), which is used in vinyl flooring.[28] In December 2006, the European Chemicals Bureau of the European Commission released a final draft risk assessment of BBzP which found "no concern" for consumer exposure including exposure to children.[29]
In November, 2005 one of the largest hospital networks in the U.S., Catholic Healthcare West, signed a contract with B.Braun for vinyl-free intravenous bags and tubing.[30] According to the Center for Health, Environment & Justice in Falls Church, VA,[31] which helps to coordinate a "precautionary" PVC Campaign,[32] several major corporations including Microsoft, Wal-Mart, and Kaiser Permanente announced efforts to eliminate PVC from products and packaging in 2005.[33] Target is reducing its sale of items with PVC.[34]
The FDA Paper titled "Safety Assessment of Di(2-ethylhexyl)phthalate (DEHP)Released from PVC Medical Devices" states that [3.2.1.3] Critically ill or injured patients may be at increased risk of developing adverse health effects from DEHP, not only by virtue of increased exposure, relative to the general population, but also because of the physiological and pharmacodynamic changes that occur in these patients, compared to healthy individuals.[35]
In 2008 the European Union's Scientific Committee on Emerging and Newly Identified Health Risks (SCENIHR) reviewed the safety of DEHP in medical devices. The SCENIHR report states that certain medical procedures used in high risk patients result in a significant exposure to DEHP and concludes there is still a reason for having some concerns about the exposure of prematurely born male babies to medical devices containing DEHP.[36] The Committee said there are some alternative plasticizers available for which there is sufficient toxicological data to indicate a lower hazard compared to DEHP but added that the functionality of these plasticizers should be assessed before they can be used as an alternative for DEHP in PVC medical devices.